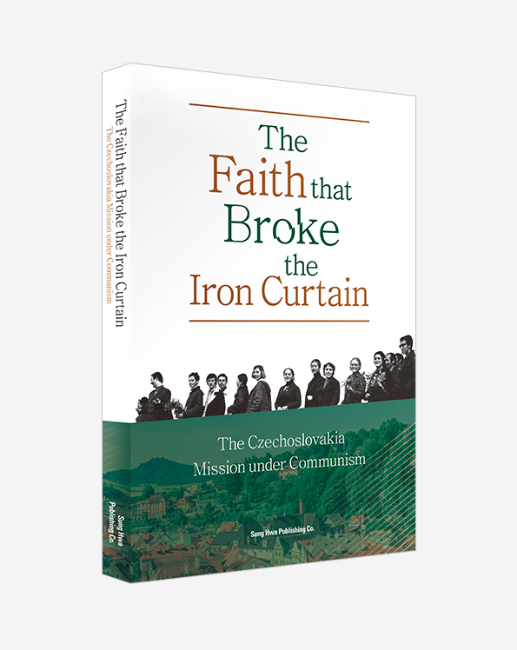 book introduction
This is a story of missionary work in Czechoslovakia under Communism, dealing with the missionary dispatch and hardships during the pioneering days, life in prison, and the end of communism. It is the story of young people who were persecuted by the state and deprived of their freedom after jumping on a mission in communist Czechoslovakia with only love for the sky, love for the country, and love for humanity. The testimonies that vividly contain the determination and courage of the European youth family from half a century ago are deeply moving.
New version / 312 pages, 256 pages / Issued on August 12, 2019
preface
Hyojung's spirit and faith to relieve the suffering of Heavenly Parents goes beyond logic. People with a heart of filial piety act for a cause without expecting anything in return. This was characteristic of the early missionaries and members of our church.
True Parents sent the first official missionaries to the Western world 60 years ago. On January 2, 1959, Missionary Young-Woon Kim arrived in the United States. Less than five years later, True Father sent missionaries from the United States to Western Europe, and another five years later, in the late 1960s, missionaries were sent from Europe to all over the world.
Among these were the first European missionaries, Peter Koch and Paul Werner. Their work to plant our churches in Germany and Austria made it possible to send missionaries from these countries to other countries as early as in the late 1960's. Emi Steberl, who first went to Eastern Europe in the Soviet Union, was one of those missionaries. The series of events described in this book were triggered by this little woman.
True Parents faced the enemies of mankind through high-quality media, educational programs, conferences, and events supporting the value of the family. However, their legacy is rooted in a spiritual movement established through a journey of pain and dedication. And the missionaries and early family members, who were the two substitutes in the field of missionary work, risked their lives every day, walked the path of self-sacrifice, and established strong spiritual conditions for world change. On this path paved by the sacrifices of two generations, today, a new generation of family members and new ethnic messiahs can stand with their eyes on the future.
In this regard, I am very happy to see the early family members documenting their lives, whether in the East or the West. Such records will preserve their experiences and testimonies of True Parents' life and achievements for future generations. Through this book, I hope that many people will realize the special value of their lives and inspire them to leave such a record.
index
at the head of the book
프롤로그| 감옥을 드나들며 선교의 초석을 놓다
Part 1 Missionary Dispatch and Pioneering Passions
01 Bridge between Eastern and Western Europe
02 aggression
03 First Family
04 The first step in evangelism
05 President of Local Association
06 Struggle for Growth
07 New missionaries from Western Europe
08 Domestic missionaries
09 warning
10 sacrifice
11 Arrest
12 interrogation
13 Police Harassment
14 determination
Part 2 Prison life and the end of communism
01 martyrdom
02 trial
03 Judgment and Sentencing
04 prison life
05 Freedom in Prison
06 Nevertheless, the movement continues
07 Release Without Freedom
08 Engagement and Blessing
09 The end of communism
10 At the end of the story
에필로그| 공산주의 개척선교역사를 돌아보다
Editor's note

Delivery costs are calculated based on weight.

All items are shipped by DHL or the Korean Post Offices EMS service.
You can track your shipment by entering the tracking number on the following web page:

Please take into consideration that some products may take additional time for delivery and processing.
Important: Your order is shipped once your payment has been cleared. Please contact our customer service center if you would like to request an exchange or return on your order.

The recipient will be held responsible for international shipments which may be subject to import duties and taxes. Please be advised that these charges are levied by the destination country and we do not have control over them. In the case that the recipient refuses to receive the parcel, the order will be returned to Korea and will not be re-shipped. Relevant expenses (round-trip shipping, customs, etc.) will be deducted from the refund.

Please take into consideration that we only accept qualifying returns but not exchanges. Refunds are issued once the returned products clear our inspection.

1) An item is eligible for cancellation if:
-you posted a Return request within 24 hours of payment and your order is still under “Pending” status (if your order is under “Preparing Shipment” status, please contact our customer service center) or
-the order is delayed for more than 10 days since payment and you have not received any notification regarding the delay; or
-the ordered item is out of stock.

-you receive a product different from your order; or

-you receive a defective product.

(1) Post a return request on our Return forum within three days of receipt. You are required to attach the photos of the received product(s) and include the item code, the order number, and the reason for the return.

(2) A customer service representative will be in contact to assist you by email or phone.

(3) Items returned must be in their original condition, which includes tags and any packaging. Also, you need to include a note of your order number, name, and user ID.

*Please be advised that returns are accepted ONLY IF you followed the instructions above and your return request has been approved by our staff. Returns that are shipped to us without any prior consent are not accepted.

*Please note that EVEN the defective/incorrect item(s) must be returned with all of the tags and labels intact. The item(s) must be sent in their original packaging and unworn.

*Please include all contents of the original package and free gifts (if applicable) in your return packaging.

* Shipping fee for any return caused by our fault will be paid by the company. However, if EMS’ cash on delivery is not possible then you can scan the return receipt and either mail it with the item to return or post an image of it on the forum. The shipping fee will be refunded once the returned item has arrived.

-you are returning the items just because you changed your mind (on size, color, etc.)
-you are returning shoes, bags, or any other accessories
-the products are damaged due to your mishandling
-your return request is not approved by our staff

The following items are not considered defective:

4) If there is a missing item from your order:

*Contact our customer service center by phone or by forum (if you cannot reach us by phone) within 1 day of delivery.
*Please keep all contents of the original package including packaging material (boxes, plastic bags etc.) with you until you are instructed otherwise.

Please note that we may not be able to process the refund for your missing item if you lose or damage any packaging material.