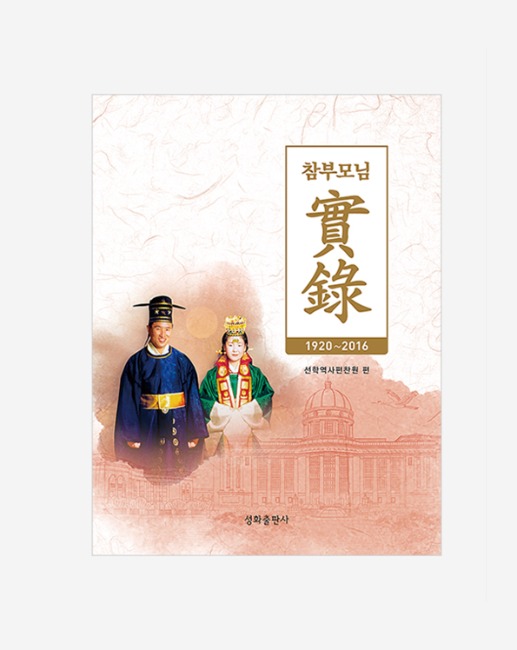 book introduction
This is a record of True Parents’ activities from Christmas to 2016. According to True Parents' providential course, the eras were divided, and the main contents were summarized and recorded as a text by period. The main providence is organized in journal format.
Edition 170×224 / 744 pages / Issued on Feb. 2, 2017
preface
This 『True Parents Annals (實錄)』 is a supplementary and re-edited version of the 『Annals of the Unification Church』 published in 2007, supplementing and re-editing what has happened since then. The period was divided according to the course of the providence, and the main contents were summarized and recorded as a passage. The main providence is organized in journal format. The Annals should describe in detail every move and major events of the subject of record in accordance with the six-fold principle. In that sense, this book does not fit the name of the annals, but the title was given to supplement the existing books. Also, since we have entered the era of Cheon Il Guk beyond the Unification Church era, it is clear that it was named “True Parents’ Annals” as it encompasses the entire history of providence.
This book consists of eight chapters, from True Parents' Christmas and providential preparations to the settlement of Cheon Il Guk and the inheritance of True Parents' traditions. In addition, the contents frequently used by researchers are added as appendices. True Parents' educational background and awards, blessing weddings, eight major holidays and major anniversaries, major lectures, year-end mottos, and 120 holy places around the world can be viewed at a glance.
Contents
publisher
1920~1959 True Parents' Christmas and providential preparation
1960~1967 True Parents' Holy Marriage and the 1st 7-Year Course
1968~1974 The 2nd 7-year course and the creation of expectations for international activities
1975~1981 The 3rd 7-year course and expansion of world missions
1982~1991 Ending the Cold War and establishing the foundation for a peaceful world
1992~2000 Establishment of Family Federation for World Peace and Unification and Completion of Covenant Providence
2001~2012 Establishment of the Kingdom of God and Preparation for the Age of Cheon Il Guk
2013~2016 Settling Cheon Il Guk and Inheriting the Traditions of True Parents
Appendix
1. True Parents’ academic background and awards
2. Blessing Wedding
3. 8 major holidays and major anniversaries
4. True Parents' Main Lecture
5. New Year's Eve
6. 120 holy places around the world
7. Major Providential Organizations
8. Major educational media companies
9. Major International Conferences
10. World Cultural Sports Festival and Peace Cup